Meat dishes are to be slashed by 20 per cent in schools, universities and hospitals in a major move to cut greenhouse gases linked to livestock. Public sector caterers have vowed to hit the target as part of a pledge which also aims to boost people’s health by lowering consumption of animal products. The meals being reduced in canteens and kitchens across the UK are eaten by a quarter of the population. Hitting the 20 per cent target would remove nearly 20 million lb of meat from plates every year – equivalent to 45,000 cows or 16million chickens. Farmers’ livelihoods will be adversely affected by the changes. The ‘#20percentlessmeat’ pledge was launched in trade magazine Public Sector Catering. 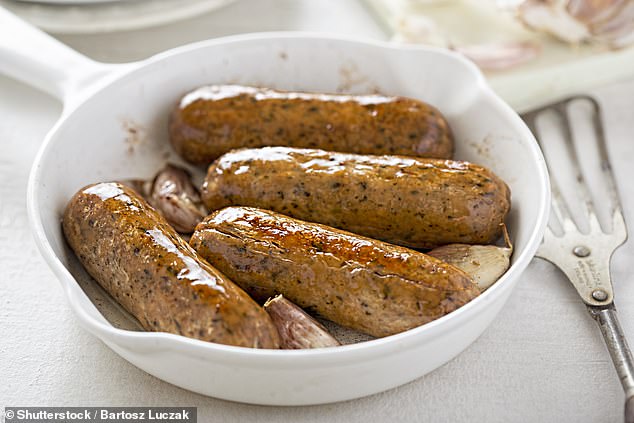 Meat dishes are to be slashed by 20 per cent in schools, universities and hospitals in a major move to cut greenhouse gases linked to livestock. Pictured: Meat-free sausages are an alternative to traditional pork sausages.

David Foad, editor-in-chief of the publication, said: ‘It represents a bold move because it is not being mandated. It would have been much easier to sit back and wait until they were either prompted or forced into action like this by Government.’ The move follows recommendations in January from the UK’s official climate change advisers.

It also reflects warnings by the World Health Organisation and doctors that high consumption of processed meat raises the risk of cancer.

Andy Jones, chairman of the PSC100 group of caterers and suppliers, said: ‘The carbon emissions savings and the potential benefit to people’s health can play a part in tackling climate change and shortening NHS queues.’

Stephen Forster, chairman of the Local Authority Caterers Association, said: ‘The school food industry is leading the way on meat reduction. Schools across the country have meat-free days and are increasingly introducing plant-based options.’

However, the head of the National Association of Care Catering, Sue Cawthray, said older people tend to be reluctant to change. ‘I would say our biggest challenge to meeting the 20 per cent target is the mindset of many of those currently in care homes,’ she said.

‘The majority would have been brought up on a staple diet of meat and veg and will be resistant to change.’ The Hospital Caterers Association revealed patients and staff are already choosing to eat less meat.

Matt White, chairman of the University Caterers Organisation, said: ‘We have a very short window of opportunity to make changes in the way we all eat or we will have done irreparable damage to our planet.’

Philip Mansbridge, director of the campaign group ProVeg UK, said: ‘Never has the public sector made a commitment of this magnitude. 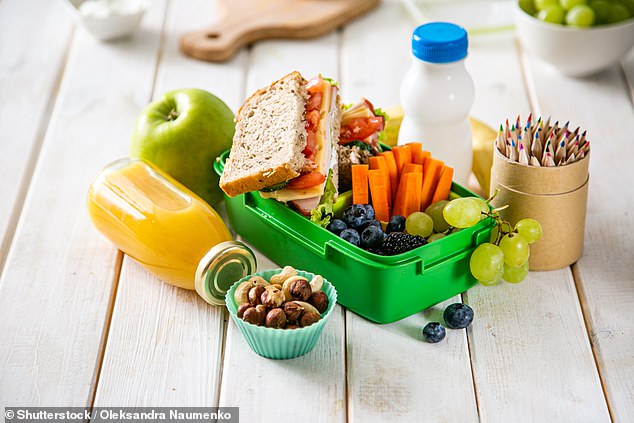 Hitting the 20 per cent target would remove nearly 20 million lb of meat from plates every year – equivalent to 45,000 cows or 16 million chickens. Pictured: Fruit and vegetables could be an alternative to meat ‘By making simple and effective adaptations, all public sector caterers will soon find more of their meals are healthier, more planet-friendly and equally or more delicious.’

The move reflects an increase in the number of ‘flexitarians’ – those who are actively cutting down on meat. Food chains are already adding more vegetarian options to menus. But the changes are not as simple as they might appear as Burger King found out this week with its attempt to attract veggie customers. The company had promoted the Rebel Whopper as its ‘first plant-based burger’ as part of Veganuary. However, the Advertising Standards Authority banned social media adverts for the product as misleading after it emerged that they were cooked on the same grill as meat burgers, while the completed version contained egg-based mayonnaise.